8989 Mata Nui is a BIONICLE set released in July 2009 depicting the Great Spirit Mata Nui in the body the Mask of Life created for him on Bara Magna. 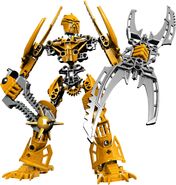 Mata-Nui as he appeared in Poptropica

Trapped on a … He fights for freedom!</br></br>Trapped on a strange world and stripped of his great powers, Mata Nui must unite a planet to save it from a great evil. Armed with a spiked Thornax launcher, scarab shield, and the powerful Mask of Life, Mata Nui leads the fight for freedom on Bara Magna!</br></br>* Mata Nui is armed with a scarab shield and a spiked Thornax launcher!</br>* Includes 1 Life Counter for the new BIONICLE battle game!</br>* Measures over 8" (20 cm) tall!tle game!