8996 Skopio XV-1 is a BIONICLE set which was released in summer 2009. Containing 849 parts, it is the largest BIONICLE set ever released. Telluris, a Glatorian from the lost Iron Tribe, is the Skopio XV-1's pilot, as he built it for personal use. The vehicle can be used as both a walker and as a driving vehicle.

Telluris lived and worked with the rest of the Iron Tribe on Spherus Magna. Around 103,000 years ago, the Iron Tribe was struck by a mysterious disease, and nearly obliterated. The few remaining members of the tribe, including Telluris, were ostracized by the other Agori tribes, for fear that they were capable of infecting others. Telluris and the other remaining members of his tribe retreated to safety in a cave, for fear of being attacked by the diseased Iron Tribe members, and Telluris suggested that the tribe's surviving members use minerals to change the color of their armor and helmets, in an effort to disguise themselves and attempt to integrate into other tribes. Their efforts did not succeed, and Telluris later headed south.

Prior to the Core War, Telluris found some acceptance among Agori who had a love of machinery similar to his. Berix was one of his friends, and the Water Agori learned much from Telluris' teachings. Paranoia and jealousy eventually took hold, and Telluris drove others away from him, believing that the Agori were out to get him and his designs. In order to eliminate the perceived threat, he began making a powerful war vehicle, the Skopio XV-1. He modeled it after the Skopio, a creature of Spherus Magna that his tribe once honored.

Following the Shattering, he was left on Bara Magna, the desert region of the planet which formed a separate world. On rare occasions, he traded bits of information he had learned to the Rock Tribe.

While patrolling the deserts, Telluris ambushed a Bone Hunter platoon, and disappeared under the sands soon after. He soon discovered several Glatorian and Agori, and brought the vehicle up to attack them. Though they split up in an attempt to confuse him, Telluris was able to discern that Ackar was the leader of the group, and chased after him. He cornered the veteran Glatorian, but Kiina intervened, and the two worked together to capture Telluris. Telluris was overcome when Kiina jumped up into the cockpit, offering him three choices: being killed, the risk the destruction of the Skopio XV-1 or being left free to pursue the Skrall. The Iron warrior lied and accepted the third option, but the Glatorian were not fooled, and refused his offer, throwing Telluris over the side of the cockpit and leaving. Telluris soon began despairing over the critical damage done to the Skopio XV-1 by the Glatorian. As he mourned the loss of his vehicle he was approached by another member of the Iron Tribe, Sahmad. Sahmad offered him a ride north, where he was heading, in the hope that Telluris could find some parts there to repair his vehicle. Telluris accepted his offer, and the two began traveling north. Along the way, Telluris noticed a strange snake, and alerted Sahmad to it. As he moved to kill it, the snake began to speak, revealing itself to be Metus, and claiming to no longer be able to dream.

As Sahmad and Metus spoke, Telluris noticed one of Bara Magna's moons hurtling towards the earth and was excited by the reformation of Spherus Magna. Telluris later accompanied Sahmad on his quest to retrace Metus' movements, hoping to learn where the snake had caught the plague. When Sahmad came across a strange pattern in the ground, Telluris searched with the others for more like it, but was unsuccessful. Soon after, a red tentacle appeared from the sands and seized Telluris, dragging him underground.

Telluris met up with Metus, who was now an Agori again, and the two rushed through caverns until they found Sahmad and the Sisters of the Skrall, along with the glowing being who had killed the Iron Tribe. Telluris helped lead Sahmad away with Metus to the surface of Spherus Magna, where they encountered the creature. Telluris suggested using his Skopio to stop the entity, Annona, but Sahmad rejected the idea, as the Skopio was in a state of disrepair. Annona left to find other sources of food, and Sahmad tricked Telluris into going after it by claiming that it would attack his Skopio. Telluris, forgetting that the Skopio was non-functional, chased after Annona, accompanied by Sahmad and Metus. They all jumped into Annona as it teleported away, and the three found themselves on Aqua Magna, where Annona was headed for a fortress. Telluris picked up a branch to use as a weapon, and joined Sahmad and Metus in scaling the cliffs, where they found many Skakdi trapped in Annona's illusions. As the three watched, Annona was confronted and assaulted by a golden being. During the fight, Telluris charged Annona with his makeshift branch weapon, and tried to spear her. However, he was killed by Annona before he could do any damage.

Telluris was arrogant and sure in his abilities, a confidence afforded to him by the power of his vehicle. Telluris disliked most other beings, including the remaining members of the Iron Tribe. Due to the decimation of his tribe, Telluris went mad, and was feared by others because of it. He was also very attached to his vehicle, and mourned that it had been broken as if it were a living creature.

The Skopio XV-1 is a massive vehicle designed and piloted by Telluris.

Telluris based the design of the Skopio XV-1 on the Skopio, a creature native to Spherus Magna. The vehicle was intended to be used against enemy caravans and creatures by Telluris.

After the Shattering, Telluris was isolated on Bara Magna, and continued using the Skopio XV-1 to traverse the Wastelands, shunned by the rest of society for fear of carrying the mysterious plague that wiped most of his tribe out.

While traveling through the desert, Telluris used his vehicle to wipe out a band of Bone Hunters before disappearing back into the sand. Some time after, a convoy carrying Exsidian and escorted by four Glatorian passed by his hiding spot. Telluris brought the Skopio XV-1 out to attack them, firing a Thornax at Ackar. Kiina raced toward the Skopio and managed to climb onto it. Meanwhile, Ackar and Gresh used the Exsidian to jam its treads. Kiina then reached the piloting area and captured Telluris, though he later escaped of his own accord. Upon reviewing the machine's history, the Glatorian sabotaged the Skopio XV-1 so it could not be used again. Telluris returned to his vehicle, only to discover the damage. Though he did not have the parts to fix it, his fellow Iron tribesman Sahmad offered to take him up north to acquire what he needed, though Telluris was killed during the voyage.

The Skopio XV-1 features the ability to travel using its four mechanical legs. It can also fold these legs up, activating the treads and allowing for greater speed. It also possesses a Thornax Launcher and two force blasters for offensive power, allowing for effective long and close-range attacks. 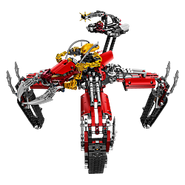 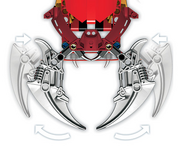 A Skopio creature in BIONICLE: The Legend Reborn, modeled from the Skopio XV-1