The Rattlecopter is a flying vehicle used by the Fangpyre in Ninjago: Masters of Spinjitzu. It was created in the episode Snakebit when several Fangpyre bit Ed and Edna Walker's helicopter. In the TV series, the Rattlecopter has a platform to carry the Fangpyre general, Fangtom, or additional troops. In the episode Never Trust a Snake, the Fangpyre used the Rattlecopter to battle the Hypnobrai. When Fangtom realized that Skales was leading the Hypnobrai after defeating Slithraa in the Slither Pit, the two called off the battle. They considered turning Lloyd into a snake, or hypnotizing him and making him think he was a pig. Hearing this, Lloyd ran away and climbed atop the Rattlecopter. The vehicle apparently sensed his presence, and lashed its tail so that Lloyd was flung far away from the two tribes. In The Rise of the Great Devourer, Skales commanded the Rattlecopter to rescue Pythor P. Chumsworth, who had recently taken back the four Fang Blades, from aboard the Destiny's Bounty. 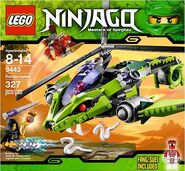 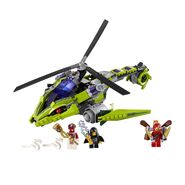 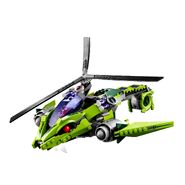 The Rattlecopter with open cockpit

The back of the Rattlecopter