Brickipedia
Register
Don't have an account?
Sign In
Advertisement
in: Class 4 articles, Sets listed for ages 8-14, 9000 sets,
and 3 more
English

9446 Destiny's Bounty is a 684 piece Ninjago: Masters of Spinjitzu set released in December 2011. It includes Kendo Jay, Kendo Zane, Lord Garmadon, Sensei Wu, Skales, Slithraa, a small shrine which holds the Hypnobrai Snake Staff and the Destiny's Bounty, which is the ninja's new headquarters. It has various secret compartments. It also includes one firing cannon.

The Destiny's Bounty was originally a pirate ship commanded by Captain Soto, and was considered the most feared and legendary pirate ship after Misfortune's Keep. It eventually sank while Soto and his crew were searching for the Dark Island, only to somehow end up in a desert in Ninjago some 200 years later. There it was found by Zane's Falcon, who led the Ninja to it after the destruction of the Monastery of Spinjitzu so that they could use it as a base. Equipped with advanced technology that included the ability to fly, it became the mobile headquarters for the Ninja.

After being destroyed in the battle against The Great Devourer, the Destiny's Bounty was rebuilt as the Black Bounty by the power of Garmadon's Mega Weapon, and served as his base and that of the Serpentine warriors for some time. The ship was briefly reclaimed by Sato and his crew after they were revived by the Mega Weapon, and later recovered by the Ninja after a race. It was later used by the Ninja to evacuate Ninjago City after the Stone Army attacked, and then used to sail to the Dark Island. While there the Ninja were able to get it airworthy again with help from Dr. Julien, only for it to be brought down when he used it to save Lloyd from Garmadon, who had been possessed by the Overlord. However, the ship was eventually rebuilt into a more powerful version. 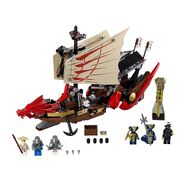 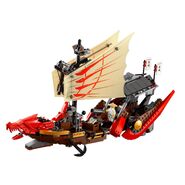 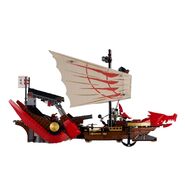 The front and anchor

The Destiny's Bounty in the TV Series

x12px $159.99 +
Released
2011 +
ShopDescription
Sail into an epic battle on board Desti … Sail into an epic battle on board Destiny’s Bounty!</br></br>On a dangerous journey aboard Destiny’s Bounty, an ancient shipwreck, Sensei Wu and the ninjas have located the powerful golden Hypnobrai staff deep inside of the secret snake shrine. As they land the flying ship in the water to seize the staff, Sensei Wu, Zane and Jay get a scaly surprise from the Hynobrai General, Skales, and his accomplice warrior, Slithraa. Sensei Wu fires the ship’s cannon into the battle until his ancient enemy, Lord Garmadon, appears. Can Sensei Wu protect the Ninjago treasures on board without the help of the ninjas? Choose your battle in an epic showdown where the fate of the Ninjago world hangs in the balance! Includes 6 minifigures: Sensei Wu, Kendo Zane, Kendo Jay, Lord Garmadon, Skales and Slithraa; Destiny’s Bounty ninja ship, snake staff shrine, golden Hypnobrai staff and 16 weapons.</br></br>*Includes 6 minifigures: Sensei Wu, Kendo Zane, Kendo Jay, Lord Garmadon, Skales and Slithraa</br>*Features Hypnobrai snake shrine and golden Hypnobrai staff</br>*Weapons include: 2 golden daggers, big spear, bo staff, 2 sai, golden serrated blade, 4 ninja swords, 4 crossbows and ninja claws</br>*Transform Destiny’s Bounty into a flying ship!</br>*Fire the cannon shooter with 4 cannonballs!</br>*Protect the secret treasure on board at all costs!</br>*Stow the ninja weapons in the ship’s weapon racks!</br>*Launch the working anchor when you reach the shrine!</br>*Measures over 16” (43 cm) long, 10” (26 cm) tall and 11” (30 cm) wide26 cm) tall and 11” (30 cm) wide +
Theme
Ninjago +
Title
9446 Destiny's Bounty +
Txt1
Kendo Jay +
Txt2
Kendo Zane +
Txt3
Lord Garmadon +
Txt4
Sensei Wu +
Txt5
Skales +
Txt6
Slithraa +
Type
Set +
USPrice
$79.99 +
Advertisement