Brickipedia
Register
Don't have an account?
Sign In
Advertisement
in: Class 4 articles, Sets listed for ages 7-14, Ninjago,
and 3 more
English

9455 Fangpyre Mech is a Ninjago set released in 2011 in the US, and 2012 in the UK. It includes a snake mech and a newly designed exclusive Scythe of Quakes. The set includes two minifigures; Kendo Cole and Fang-Suei. It features a purple flick missile on the left hand, two grabbers, a flexible body and an opening cockpit/roll cage. It is 26 cm long and 24 cm wide. The hands and legs are attached to ball joints, making the mech flexible. It has a colour scheme of green, purple and grey. The tail seems similar to the tail of 2260 Ice Dragon Attack except in the colour green. It uses new flat tiled circles and several rare purple bricks. 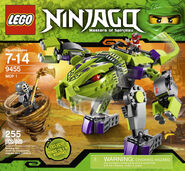 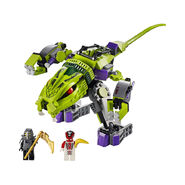 One of the grabbers