9461 The Swamp Creature is a Monster Fighters set released in May 2012. It includes two minifigures, Frank Rock, and an exclusive Swamp Creature. The set also also includes a small swamp boat with two flick-fire missiles, and a small piece of a swamp which holds the Swamp Creature moonstone.

The Marsh
The set consists of two major builds. The first part is a small 4x4 piece of marsh, a 1x1 black brick with a clip holds a sea weed piece, then a 2x1 slope piece of the other side, a dark green transparent piece is used to hold up the 2x2 flat piece with a stud in the middle of it, which holds the Swamp Moonstone. To decorate the marsh, there are a total of three dark green transparent 1x1 flat pieces to represent the sliminess of the marsh, and a new 2x1 piece is a clip, to hold a fish. There is also a green frog used to decorate an edge of the marsh.

Swamp Boat
The swamp-boat has two large floats, which are connected with a few 2x2 pieces, and dark blue transparent pieces to hold it up, then, 4 small 2x1 arch pieces, and an angular brick with a hole in it and a silver stud on top of it, holds two receptacles on either side, which hold a flick-fire missile each, which has a dark red cone piece as the missile. Two connector pegs with knobs are used to hold trans-yellow stud pieces as lights, at the back of the boat is a 1x2 TECHNIC piece, with a connector peg which holds a propeller, above that is a 2x4 plate with positions a brown seat with a 1x4 plate with 2 knobs, instead of one, is used to hold two antenna used as joysticks, a radiator grille is also used to decorate the last two knobs of the 2x4 plate.

Frank Rock is on a mission to the Cold Sleep Swamp, in an attempt to retrieve the Swamp Moonstone. But the Swamp Creature who lives there lies waiting with its spear at the ready, and won't give up so easily. 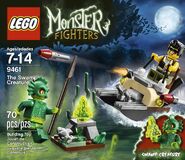 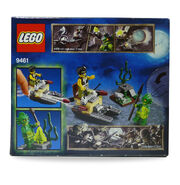