9462 Mummy is a Monster Fighters set released in May 2012. It includes two minifigures, a new Mummy, a skeletal horse, and the Monster Fighter Ann Lee. The set consists of two parts: an autogyro, and a small horse-drawn carriage, and includes 90 pieces.

The Chariot is made of several sloped bricks, built upon a platform to which the wheels attach. Also connected to this platform is a rope piece, which connects into the saddle of the skeletal horse that pulls the carriage. The Mummy King can stand in the carriage behind the sloped bricks, and direct the carriage from there.
The skeletal horse is made with the same mold used for the Castle (2007) sets several years before, but will be glow-in-the-dark, as shown on a toy fair video. The skeletal steed has two transparent orange flames, which represent its fiery eyes. It wears a saddle made of two bricks with studs on the sides, with a gold scorpion atop them, and the Mummy Moonstone atop that. Attached to the sides of the multi-studded bricks are two spears.

The Autogyro mainly consists of a single platform, with an engine and joysticks connected to it at different ends via SNOT bricks. A three-bladed propeller is connected into it with TECHNIC parts, and can be turned. It has a pair of skis (used in the Ice Planet 2002 sets) representing the landing gear.

The Mummy King roams among the burial tombs of the Cursed Badlands in his chariot, pulled by a fiery-eyed skeletal steed. Ann Lee is in hot pursuit, and using skill and stealth together, she just might catch up with this embalmed adversary. 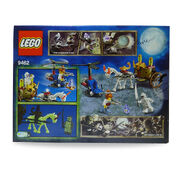 Unedited picture of the set, where the beams holding up the autogyro have not been deleted.