9463 The Werewolf is a Monster Fighters set released in May 2012. The set includes a tree, a car, Major Quinton Steele, and the Werewolf.

The tree is the biggest part of the set. It is multicolored and is green, tan, and brown. A catapult is built into the top of the tree that can launch the Werewolf. The catapult is hidden by foliage the rest of the time. The pedestal part includes four bone pieces and a raised piece to place the orange Werewolf Moonstone on.

The Hot Rod has four weapon holsters to place pistols as the engine and the Major's blunderbuss gun can be held on the side of the car. The car has four headlights, a windshield, a steering wheel, a silver frog piece as a hood ornament at the end of the Hot Rod, and the driver's area. The driver can sit down, but stands in the image. The car has two bigger wheels for the back and two smaller ones in the front, a style which is used in many Monster Fighters sets.

Based in the deep, dark Drachwald Forest, the Werewolf lives, and protects the Werewolf Moonstone from the Monster Fighters, and his human arch-enemy, Major Quinton Steele, who is armed with his blunderbuss, and enjoys hunting exotic prey. The set's story is that the Major is out looking for the Moonstone, which he finds sitting rather invitingly in a tree for the Major, and the Werewolf tries to pounce on the Major using the tree function in the tree.

The major in his car

Quinton and the Werewolf fighting

The Werewolf standing on the tree's feature.

The affect the feature has on the tree. 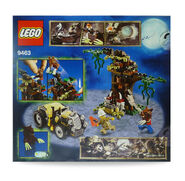