The set consists of two builds; The hearse and the motorcycle, which in total is 314 pieces.

Dr. Rathbone uses his fencing rapier, dynamite stick and a revolver on his dark red motorbike, first used in 7306 Golden Staff Guardians back in 2011 for the Pharaoh's Quest line. Using a 1x1 flat piece with a handle to hold either the Dynamite or the revolver, and a 1x1 transparent yellow piece at the front for the light. On both sides, megaphone pieces with flames on the end of them as a boost to the motorcycle's speed.

The hearse uses two different sizes of wheels, a style used consistently in the Monster Fighters line. On the front of the hearse sits the Vampyre Moonstone, on a gold 2x1 plate with a knob, and a radiator grille in front of it. The headlights are made using 1x1 transparent red stud pieces, with attic 1x2/45° piece. The white horn pieces are used at the front to stylize the hearse as a vampire, itself. Inside, the driver's area has enough room for two minifigures, and has a steering wheel for the Zombie Driver to drive the hearse with. Behind the cab area is the coffin boot, with Lord Vampyre inside his coffin, with the main feature of the set; On two sides of the hearse are two BIONICLE eyes, which where used predominantly in the Toa Hordika line of 2005, which, if pushed down, release the coffin into the air, to pounce on the Monster Fighter. At the back of the car, there are two more horn pieces, just like at the front of the car, and a 1x4x1 fence piece in black, and 2x1 transparent yellow pieces and transparent red pieces, as the lights for the back of the car. The car's top has a glow in the dark sticker featuring an image of a fiery vampire face.

The Vampyre Hearse is used by Lord Vampyre, and drvien by the Zombie Driver, Lord Vampyre's loyal servant. It is driven around the Monster Realm, as Lord Vampyre checks the lands for the Moonstones, and is used as his main vehicle. A built-in launching coffin feature is used to pounce on his enemies, and to scare off any intruders such as Dr. Rodney Rathbone. The main story of the set is that Dr. Rathbone is trying to catch up to the hearse and steal the Bat Moonstone, Lord Vampyre's attempt to catch him, and fight him for the Moonstone.

The Zombie Driver taking Lord Vampyre's coffin out of the hearse. 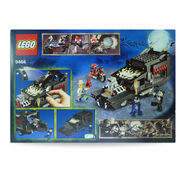 Back of Box, showing main features.

The Glow in the Dark features

The small comic on the back of the box