9466 The Crazy Scientist and His Monster

The Crazy Scientist and His Monster

9466 The Crazy Scientist and His Monster is a Monster Fighters set released in June 2012.

The car also has concealed hind wheels, 'jets' for speed, a radar dish attached to the roof. The Crazy Scientist's lab consists of a small jail, a rack of tools, a moving platform, and a tower with a laser. The jail cell is where the scientist puts any Monster Fighters who get in his way. It has a wall which can be pulled down using a chain that can be attached to a pin on the back of the car. On its roof is a catapult for launching trans-neon green 1x1 rounds, perhaps intended as chemical-filled test tubes. The tool rack is a long rack filled with scientific materials such as a conical flask and a glow-in-the-dark skull in a beaker. The laser on the tower lights up, and is used by the scientist to to bring the Monster to life. The tower itself has two coils and a super conductive antenna, and in the center is the Thunder Moonstone. The set includes 4 minifigures; The Crazy Scientist, his Monster, Dr. Rodney Rathbone and Major Quinton Steele.

The Monster Fighters, Dr. Rodney Rathbone and Major Quinton Steele attempt to take the Thunder Moonstone from the Laboratory of Uncanny Creations before Lord Vampyre does. Meanwhile, the Crazy Scientist brings to life his greatest creation: The Monster. The Scientist and his Monster imprison one of the fighters, but the other manages to pull the back off of the prison cell. 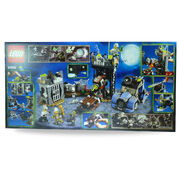