9472 Attack on Weathertop is a set in the theme The Lord of the Rings released in May 2012. The minifigures included are Aragorn, Frodo Baggins, Merry and two Ringwraiths. The main body of the set is Weathertop, it seems to have a hollow with a fire. On top there are ruins.

It represents the scene in The Fellowship of the Ring where on their way to Rivendell, Aragorn, and the four hobbits camp in the ancient Arnorian ruined watchtower. While Aragorn scouts around, the Hobbit's campfire alerts the Ringwraiths of their position before Frodo can stamp it out. The Hobbits then flee up the stairs to the watchtower, and the five Ringwraiths close in. Frodo puts on the Ring, and is stabbed by the The Witch-King of Angmar, the leader of the Ringwraiths. Aragorn runs to their aid, and battles the Ringwraiths with a torch.

The set opened up

Merry falling down the trapdoor

The two Ringwraiths running towards the camp 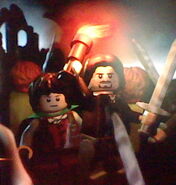 Retrieved from "https://brickipedia.fandom.com/wiki/9472_Attack_on_Weathertop?oldid=1973985"
Community content is available under CC-BY-SA unless otherwise noted.