Brickipedia
Register
Don't have an account?
Sign In
Advertisement
in: Class 4 articles, Sets listed for ages 8-14, 2012 sets,
and 2 more
English

The set shows Saruman's Uruk-hai building his army underneath Isengard. The first time the Orc Forges are seen is when Saruman is creating a group of Uruk-hai to pursue the Fellowship, led by Lurtz. The forges are seen again in The Two Towers, when Saruman is creating an army of 10,000 Uruk-hai to kill Theoden and his Rohan Soldiers at Helm's Deep. However, when Isengard is unleashed onto Helm's Deep, it is left virtually unprotected, and the Ents of Fangorn, led by Treebeard, attack Isengard. During the attack, the dam holding the Isen River is broken, flooding the underground forges.

The birth of Lurtz

The Orcs and the equipment included in the set

The Mordor Orcs (Note: Only 2 come in the set) 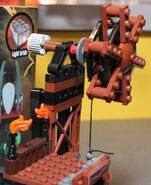 A close up on the Orc construction mechanism

x12px $89.99 +
Released
May 2012 +
ShopDescription
Build the dark army of Sauron at the Or … Build the dark army of Sauron at the Orc Forge!</br></br>The Uruk-hai army is growing! Grown in the smoldering depths of Isengard, the Uruk-hai and their general, Lurtz, pull one new Uruk-hai after the other from the ground. Use the winch and slide the metal into the smelting pot to make weapons for the growing army. Dig out the Uruk-hai from the ground. There's no rest when there's a dark army to build! Includes 4 minifigures: Lurtz, Uruk-hai and 2 Mordor orcs.</br></br>* Includes 4 minifigures: Lurtz, Uruk-hai and 2 Mordor orcs</br>* Lurtz includes armor, shield, helmet, and sword</br>* Forge features winch with bucket, chute and furnace with LEGO light brick</br>* Also features Uruk-hai growth pit</br>* Includes 3 standard helmets, 3 sets of standard armor, special Isengard Uruk-hai helmet and armor, and anvil</br>* Wind the winch!</br>* Slide the metal down the chute!</br>* Stoke the fire with the LEGO light brick!</br>* Pull the Uruk-hai from the ground!</br>* Collect the exclusive Lurtz minifigure!</br>* Forge measures 8" (21cm) high and 9" (22cm) widemeasures 8" (21cm) high and 9" (22cm) wide +
Theme
The Lord of the Rings +
Title
The Orc Forge +
Txt1
Mordor Orc (hair) +
Txt2
Mordor Orc (without hair) +
Txt3
Uruk-Hai (Armed & white hand) +
Txt4
Lurtz +
Type
Set +
USPrice
$39.99 +
Advertisement