9485 Ultimate Race Set is a Cars set that was released in late 2011. The set contains Lightning McQueen, Pit Crew Helper, Raoul ÇaRoule and Max Schnell. A main play feature is the two slammers and three plates, each with one of the car's name on it.

The Ultimate Race Set is a Cars 2 racing set. It includes two slammers to fire cars out, three race cars and a pittie. 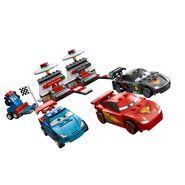 The vehicles included in the set.