Finn McMissile has tracked his spy colleague, Leland Turbo, to the secret oil rig headquarters of the evil Lemons. But unfortunately he arrived too late. Leland has been squeezed into a metal square. Professor Z and Grem start firing at our hero. Can our British super spy avoid the falling barrels, swinging crane and hail of missiles and escape to safety? Includes the following vehicles: Finn McMissile, Professor Z, Grem, Leland Turbo and the Crane. (from LEGO.com) 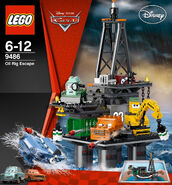 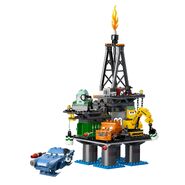