9557 Lizaru is a Ninjago booster pack to be released in September 2012. It includes Lizaru, a character card, four battle cards, three of the new snake blades included in 9555 Mezmo, and 9591 Weapon Pack but in transparent neon green, two snake tail shields, a block to raise the spinner, and three weapons consisting of an axe, a golden double sided weapon with an axeblade and regular blade, and a silver flail. The cards included with 9557 Lizaru are as follows:


Poison Whips
Type- Fire
Cost- 100 SP
Card #- 44
Effect- Build the above on spinner until a player wins, then remove.


Boost
Type- Fire
Cost- 300 SP
Card #- 38
Effect- Add SP 200 to all four of your powers until a player wins. Immediately play another card.
Other- Lizaru cannot play this card without first playing a card to boost his Fire SP.


Fair Fight
Type- All
Cost- 300 of each SP
Card #- 125
Effect- Both players discard all face-up crown cards. No other cards can be played until a player wins.
Other- Lizaru cannot play this card without first playing a card to boost his Fire SP and Earth SP. 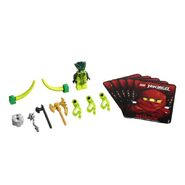 The set in its entirety.
Add a photo to this gallery

Retrieved from "https://brickipedia.fandom.com/wiki/9557_Lizaru?oldid=1885255"
Community content is available under CC-BY-SA unless otherwise noted.