Brickipedia
Register
Don't have an account?
Sign In
Advertisement
in: Class 3 articles, Sets listed for ages 6 - 14, 2012 sets,
and 2 more
English

The set includes Kai in his NRG form and Chokun, two spinners, and two spinner crowns. Ten weapons are also included: a translucent orange viper, a golden flail, a golden fang double-spear, a sword, an axe, a dragon's breath spear, a scythe, a drill spear, a silver dark blade, and a hammer. There are also shields and blades included. For his shields, Kai has two flames on cone pieces, while Chokun has two walls similar to the ones included in 9555 Mezmo. Kai's spinner blades are spears, resembling the ones that appear in 9554 Zane ZX. Chokun's "blades" are trans-orange snakes similar to the ones in 9557 Lizaru and 9555 Mezmo (although in a different colour). 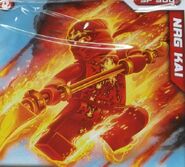 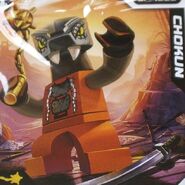