The set includes 80 pieces, mainly in Orange, Black, and Dark Stone Grey. The main model of the set is a mini-model of Sebulba's Podracer on a clear stand with a identification plaque, as well as a Sebulba minifigure holding a wrench. The set also includes two joining Tatooine planet pieces. The Tatooine model can be hung using a piece on top and string, or used as a carrying case for the disassembled set.

Sebulba was a famous Dug Podracer pilot and one of Anakin Skywalker's competitors in the Boonta Eve Classic of 32 BBY. A renowned cheater, he pulled several dirty tricks in that race alone; deliberately ramming Mawhonic into a cliff face, using an illegal flamethrower mounted on his podracer to destroy Clegg Holdfast's podracer, tossing a metal tool into Mars Guo's air intakes, and sabotaging Anakin's engine pod before the race. Despite the sabotage, Anakin persisted in challenging him for the lead, and after several attempts to ram him off the track, a hose on one of the engines on Sebulba's podracer finally got hooked on Anakin's podracer. Anakin then boosted his engines, speeding up and cutting the hose. The damage caused Sebulba's power couplings to fail, causing him to crash. Sebulba himself survived. Never one to miss an opportunity for glory, he purchased Anakin's podracer after the race and immediately resumed his notorious career. 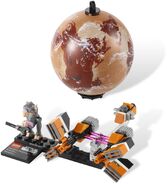 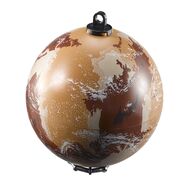