The set consists of four parts- an X-Wing starfighter, a model of the planet Yavin 4, an X-Wing Pilot minifigure, and a stand to set the various disparate components on.
The X-wing is made out of a long centre section, made of white and dark red plates. Slanted pieces add a cockpit and a point to the end of the starfighter. A large section, placed at the back of the starfighter, has four long baton-like sections attached to it, two on either side. To each of the batons is attached a large wing, made of a slanted white plate, with some other small plates attached to it on either end. A flick-fire missile section is stuck to the end of each wing.
The planet is mostly green, and printed with brown and green swirls. It is made out of two half-cone pieces, connected to each other. The stand is black, and the minifigure and X-wing can both be placed on it.

X-Wings were vehicles used by the Rebel Alliance in their fight against the Galactic Empire. During the Battle of Yavin, at least sixteen X-wings amongst along with a mixture of Y-wings and R-22 Spearheads were deployed by the Rebel Alliance in an effort to destroy the Death Star before it could get into firing range to destroy Yavin IV. Ultimately, Luke Skywalker was successful in destroying the Death Star, saving Yavin IV from destruction. 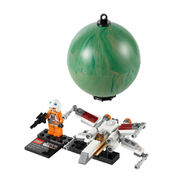