The AT-ST featured in this set bears significant resemblance to the one included in 4486 Mini AT-ST & Snowspeeder featuring a printed blueish grey 2x2 flag. The AT-ST is composed of blueish grey and dark blueish grey bricks and features posable legs for extra playability.

The set also features newly redesigned AT-ST Pilot which is currently exclusive to this set.

AT-ST's also known as "chicken walkers" were commonly used vehicles by the Empire during Episode 5 and 6 of Star Wars, participating in the Battle of Hoth and the Battle of Endor. The AT-ST's were produced by Kuat Drive Yards. 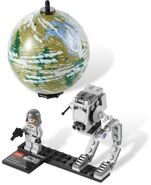 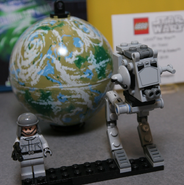 The planets on display

The set on display

Back of box
Add a photo to this gallery