Brickipedia
Register
Don't have an account?
Sign In
Advertisement
in: Class 2 articles, Sets listed for ages 8+, 9000 sets,
and 2 more
English

The NXT Intelligent Brick is fitted with seven output and input ports and one USB port, all fixed at the top and bottom of the brick. It is powered by six 1.5v AA or six rechargeable lithium batteries (which can be found in set 9798). This set features a 32-bit ARM7 microprocessor, being controled via four buttons on the top, under the display. Both sides have got TECHNIC holes, so the brick is compatible to other TECHNIC elements. In 2009, a black version of this set was released, named 10287 Intelligent NXT Brick, including a special program which isn't available here. 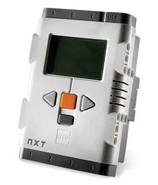