The ADU Scienttist is an Alien Conquest minifigure released in 2011. He has a white body with scientific features printed on his both sides of his torso, hips and legs. He uses a recoloured version of Dastan's hair piece and sports new facial printing. The ADU Scientist has only appeared in one set. 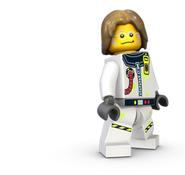 A computer generated image of the minifigure