The ADU Soldier,[1] named Deborah,[2] is an Alien Conquest minifigure introduced in 2011.

The ADU Soldier wears a dark azur A.D.U. uniform with printing on the torso, hip, and legs; the torso print is shared with the ADU Rookie. Her gloves and hip are dark stone grey, while her helmet's visor is transparent. Her face has feminine lips and eyelashes, and features two facial expressions: one showing a confident smirk, the other showing a serious scowl.

Deborah is the Soldier of the Alien Defense Unit. She is proficient with A.D.U. weaponry and technology, and she is an enthusiastic fighter determined to prove that she is capable of completing her mission to stop as many alien invaders as she can. She eagerly requests the order to pilot the Interceptor Shuttle into battle against the Alien Mothership.

In LEGO Legacy: Heroes Unboxed, Deborah has been taken over by an Alien Clinger named Gorwell. Together, Deborah and Gorwell form an Explorer support unit with the abilities "Model 7066-1 Blaster", "Hive Mind's Orders", "Cerebral Feast", "Where Did All My Friends Go?", and "Mother Ship Backup".

In the Piptown United campaign, Deborah was stationed on planet Krysto with the Ice Planet 2002 team when she became Gorwell's host. Gorwell uses her as its puppet, forcing the Builders to battle her to stop the alien parasite from spreading its mind-controlling influence. 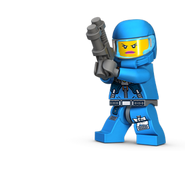 CGI of the ADU Soldier 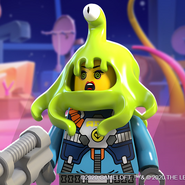 Deborah and other Space heroes in LEGO Legacy: Heroes Unboxed

Retrieved from "https://brickipedia.fandom.com/wiki/ADU_Soldier?oldid=2019678"
Community content is available under CC-BY-SA unless otherwise noted.
... more about "ADU Soldier"
RDF feed
Accessories
Gun
Helmet
Visor +
Appearances
7066 Earth Defence HQ +
ArticleRating
4 +
Image
Astro-2.png +
InfoboxTemplate
Minifigure +
ShopDescription
BIO
“Sir, yes sir! No aliens wi … BIO<br/>“Sir, yes sir! No aliens will be stealing any brainpower while I’m around, sir! I am fully proficient with all A.D.U. weapons and technology, and I am ready, willing and able to use every single one of them to defend the Earth from extraterrestrial attack. We are the best-trained, best-experienced, best-equipped fighting force around, and we will get the job done. Those creepazoids have messed with the wrong planet!”VEHICLE<br/>“Sir! I’ve studied all the specs of the Interceptor Shuttle, and I am confident that it has the speed and firepower to take on the Alien Mothership. Just give the word and I’ll prove it! Until then, I’ll keep stopping as many aliens as I can. That’s my primary mission – and the Interceptor’s, too!”ary mission – and the Interceptor’s, too!” +  and A body-snatching support unit whose infest … A body-snatching support unit whose infestation spreads across its allies. Despite wanting to enslave the entire galaxy with its iron will, Gorwell is a surprisingly friendly extraterrestrial invader.Trivia<br/>Sometimes called Alien Clingers or Pluuvian Brain-Beasts, little is known about Gorwell's race of cranium-sucking body snatchers. Given the chance, it's easy for Gorwell to completely control victims like its current host, Deborah... What's not so easy is pretending that there isn't a gigantic, slimy alien sitting on their head. Galactic domination is their strong suit. Earthling small talk? Not so much.Brain-Beast<br/>Both the ADU Soldier and Alien Clinger debuted in 2011.Third Eye<br/>The Alien Clinger appeared in three sets.Last Stand<br/>The ADU Soldier appears in one set, the "Earth Defense HQ."Wrath of Conquest<br/>Both the Alien Clinger and ADU Soldier are from the "Alien Conquest" Space theme.Studio Head<br/>An Alien Clinger appeared in THE LEGO® MOVIE™.lien Clinger appeared in THE LEGO® MOVIE™. +
Theme
Alien Conquest +
Title
ADU Soldier +
Years
2011 +