An AT-ST Pilot, also known as an AT-ST Driver is a minifigure released in 2007 representing a generic Imperial AT-ST pilot from the Star Wars Universe.

This minifigure is dressed in a light grey uniform, with a black belt and black gloves. The minifigure's head features goggles, a mouth and a chinstrap, which is for the open-faced helmet that the pilot wears. The minifigure also comes equipped with one blaster pistol. The original's head is the same as the original variant of General Veers, the second variant's head is the same as the redesigned Death Star Trooper.

AT-ST pilots, officially known as Imperial Army pilots, were trained by the Galactic Empire to have a substantial sense of balance and of the surrounding terrain due to the mechanics of the AT-ST. They were known to have worn limited shoulder and arm armor. Standard equipment for an AT-ST pilot included concussion grenades, a blaster pistol, a blaster rifle, flares, a comlink, and two thermal detonators.

They saw extensive use on the forest moon of Endor. When the Death Star II was being constructed over the moon, a bunker containing a generator was built by the Empire, which provided a force field to the unfinished battle station. Pilots were stationed there as part of the moon's garrison, piloting AT-ST walkers through the dense forest. Many of them were killed during the Battle of Endor by Rebel forces. 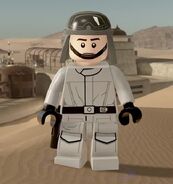