Aberforth Dumbledore is a playable character in LEGO Harry Potter: Years 5-7. He is the younger brother of Albus Dumbledore who was the headmaster of Hogwarts School of Witchcraft and Wizardry.

He attended Hogwarts School of Witchcraft and Wizardry between 1895 and 1902. His father, who had been sentenced to prison for attacking three Muggles, died in Azkaban when Aberforth was young, and his mother and sister were later accidentally killed. Due to these familial tensions over many years, Aberforth did not have a good relationship with his brother, Albus. He attacked Albus and broke his nose. Aberforth was the owner and barman of the Hog's Head Inn in Hogsmeade, and was a member of the original Order of the Phoenix during the First Wizarding War. In 1998, he assisted Harry Potter, Ron Weasley and Hermione Granger from a distance during their Horcrux hunt, sending the House-elf Dobby to help them escape from Malfoy Manor. He later allowed them to use a secret tunnel that connected the Hog's Head to Hogwarts when the trio arrived in Hogsmeade. He subsequently fought in the Battle of Hogwarts and survived the Second Wizarding War. He continued to live in Hogsmeade, tending to his goats. In the DS version, his character token is found in the level "Hogsmeade". 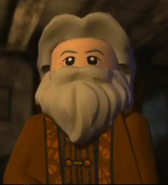 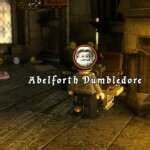 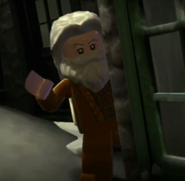