The Abilisk is a buildable brick built creature from Marvel Super Heroes released on 2017.

The Abilisk was an extraterrestrial tentacle monster that was from an unknown planet. It appeared on the planet Sovereign, drawn by the Sovereign race's Anulax Batteries and began feeding on them. The Sovereign race, believing that it was beneath them to fight the Abilisk themselves, hired the Guardians of the Galaxy to kill it.

The Guardians set up a trap for the Abilisk. When the Abilisk returned to feed on the batteries, the Guardians attacked it, with a large battle taking place. It saw one of the Guardians running towards it and simply swallowed him. With two other Guardians drawing its attention, the Abilisk looked up, snapping at them. To its surprise however, Gamora drew her sword and drove it into its injury, cutting the creature open. The Abilisk collapsed, with it dying soon after from "blood" loss. 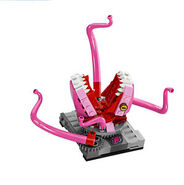