Brickipedia
Register
Don't have an account?
Sign In
Advertisement
in: Class 3 articles, Video game only minifigures, Minifigures introduced in 2013,
and 2 more

"Why didn't they make me the supervisor here? That guy's got sand for brains."
―The Abomination on Sandman in LEGO Marvel Super Heroes

The Abomination has a similar appearance to the Hulk, but with a few differences: He wears no trousers, has bony extrusions from the body, a bald head, and is dark tan in colour. His face features cheekbones and large green eyes with black pupils. He also has a scaly back and spikes come out of his spine. This variation is based on his appearance in The Incredible Hulk.

Emil Blonsky was a twisted Russian agent who disguised himself as a military-agent in-order to spy on the base where Dr. Bruce Banner and General Ross were developing a Gamma Bomb which could be used to combat Russia. Blonsky sabotaged one of the field tests of the bomb in hopes of assassinating Dr. Banner but as a result he inadvertently transformed the doctor into The Hulk. Following this, Blonsky became part of General Ross's team to hunt down the Hulk and overtime he grew envious of the amount of power which the monster had.

Eventually Emil managed to get his hands on some of Dr. Banner's Gamma radiators and he used it on himself in-order to transform himself into a Hulk-like monster. Deemed "The Abomination" by General Ross, Blonsky was as large and strong as the Hulk but was covered in scales, had fanged teeth, claws, and he retained his human mind. Also unlike Banner, Abomination is unable to switch between human and monster form but rather he is permanently a monster. With these powers Emil became a chaotic and evil villain who fought the Hulk on countless occasions, having often tried to kidnap Hulk's then girlfriend Betty Ross.

Emil Blonsky was flown in from Russia to aid in the capture of Bruce Banner by General Ross. When Banner was found in Brazil, Blonsky chased him into a soda factory where he turned into The Hulk, destroyed the factory, and ran, leaving Blonsky the only member of his team left alive.

He volunteered to be injected with the super-soldier serum unearthed by General Ross to better their chances of capturing Banner. At Culver University, the Hulk and Blonsky squared off again, ending in almost every bone in the soldier's body being shattered, and Banner running away with Betty in his arms.

However, he healed very fast as a result of the serum, and started to slowly transform into a monster. When Ross went to arrest Banner in Sterns' lab, Blonsky got there first and demanded that Banner unleash the Hulk, but he couldn't. When Ross took Banner back to the nearest military compound, Blonsky ordered Sterns to inject him with Banner's blood, but Sterns didn't want to as he saw Blonsky had something in him already and the mixture would turn him into an abomination. Blonsky forced Sterns to inject him, and his transformation was accelerated, rapidly turning into a hulking monster with bony extrusions from his spine and elbows.

The Abomination then found his way onto the street and began a destructive rampage, in the hopes of gaining Banner's attention and luring him to a fight, now confident that he could kill the Hulk in his new form. Observing the carnage from a helicopter above, Banner decided that he had no choice but to fight the Abomination as the Hulk. Banner and Blonsky battled it out on the streets of Harlem, with aid from Ross' soldiers. Blonsky managed to bring down the helicopter Ross and Betty were in, but the Hulk saved them. After the battle, the Hulk was victorious and almost killed him, but Betty intervened. Blonsky was taken into S.H.I.E.L.D. custody, while the Hulk ran away once more.

He allies with Sandman and fights Iron Man, Hulk, and eventually Spider-Man, at Grand Central Station, to try and retrieve a cosmic brick, which is later taken back by S.H.I.E.L.D., for then analysis by the Fantastic Four.

Later, at the Ryker's Island breakout, he fights Hulk again, and Wolverine.

Nick Fury later called Abomination and some villains to help defeat Galactus, alongside the heroes.

How to fight Abomination (Rock up at the Lock up)

Struggle with Abomination demands some cunning, not brutal force. Choose Wolverine and straight to the right, until you'll get to the sniffing area. Uncover fragile point on the nearby pile of boxes and switch your character into Hulk. Now lift a container and throw it at the shining breach.

Climb on the wall as Wolverine, jumping between two white-and-blue walls to get to the top of the tower. Defeat some enemies and turn left, using spotlight to blind Abomination for some time. Then switch into Hulk and hit an enemy during easy QTE sequence.

The first part of the fight is behind you - now it's the time for the second one. Choose Wolverine and approach to the pile of sand located on the left side of the location and unearth a ladder from it (you must construct it first from the debris). Climb on the first floor, sniffing the sticky wall on the right and get to the tower on the right. Then use a claw switch to unlock another spotlight - you have already know what to do with it.

To strike a final blow, you must switch to Wolverine once more. Use a lift located on the first floor and go to the left platform, fighting your way among prisoners. Destroy a pile of junk located there and build another claw switch from the debris. Use spotlight to blind Abomination for the last time and defeat him as Hulk. That's the end of this mission!

A Close-Up of the beta version of Abomination 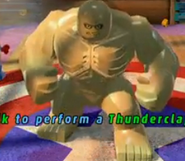 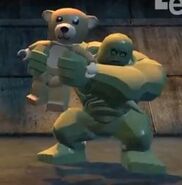 Abomination with a teddy bear

Abomination with Leader and Whiplash