Brickipedia
Register
Don't have an account?
Sign In
Advertisement
in: Class 3 articles, Minifigures introduced in 2014, Minifigures that are based on real people,
and 3 more
English

"A house divided against itself... would be better than this!"
―Abraham Lincoln in The LEGO Movie

Abraham Lincoln is one of the characters in the 2014 film, The LEGO Movie. He is voiced by Will Forte.

Abraham Lincoln was the 16th president of the United States, serving from March 1861 until his assassination by John Wilkes Booth whilst he was in a theatre in April 1865. He led the United States through its greatest constitutional, military, and moral crisis - the American Civil War - preserving the Union, abolishing slavery, strengthening the national government and modernizing the economy.

In the present, Lincoln appears on the obverse of the US five dollar bill, and on the same side of the US penny and he also famously has a giant marble statue in the Lincoln memorial in Washington DC in his honour.

Abraham Lincoln is a Master Builder in The LEGO Movie. He is among the Master Builders that meet in Cloud Cuckoo Land and to express his disdain towards Emmet where he commented "A house divided against itself... would be better than this!" Then he rode his rocket chair out of the "Dog" in Cloud Cuckoo Land much to the dismay of Emmet. He later joined in the battle against Lord Business and his forces in Bricksburg.

"A house divided against itself...would be better than this!"

Abe with Superman and Lady Liberty 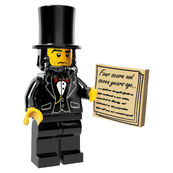 Deutsch Français
Community content is available under CC-BY-SA unless otherwise noted.
... more about "Abraham Lincoln"
RDF feed
Appearances
71004 The LEGO Movie Series
71023 The LEGO Movie 2 Collectible Minifigures
The LEGO Movie
The LEGO Movie 2: The Second Part
The LEGO Movie 2 Videogame +
ArticleRating
3 +
Image
'"`UNIQ--tabber-00000001-QINU`"' +
Img1
Cmf_lincoln.jpg +  and Lego Abe Lincoln 2.png +
Img2
Apocalypseburg Abe.jpg +  and Abe in lego movie game 2.png +
InfoboxTemplate
Minifigure +
ShopDescription
“Four score and twenty bricks ago…” Nickn … “Four score and twenty bricks ago…”</br></br>Nicknamed “Honest Abe” because he never borrows anybody’s bricks without giving them back, Abraham Lincoln lives in a log cabin that he built all by himself, in the middle of a forest that he built all by himself, then cut down, and then rebuilt all by himself again.</br></br>Abraham Lincoln is full of good and fair advice, so his fellow Master Builders often ask him to settle arguments over who gets to build what. He would probably make a great leader, but President Business’s Octan Corporation makes all of the voting machines!poration makes all of the voting machines! +
Theme
The LEGO Movie +
Title
Abraham Lincoln +
Txt1
Regular +  and Normal +
Txt2
Apocalypseburg +
Variations
Apocalypseburg +
Years
2014, 2019 +
Advertisement