Achu is an Adventurers Amazon minifigure. He is a neutral character, opposing both the adventurers and Palomar.

Achu wears a yellow headdress with several triangular ridges in a half-circle. Two bars point downwards on the sides of the arc. Most of the points are colored red with green triangles and ovals, but the two lowest ones are left blank. A blue bird's face is printed on the front and a part which falls over Achu's face resembles a beak.

Achu has a frowning expression and two thick, grey lines spread across his face stopping in the center and around his eyes and mouth. Achu wears a pointed, red cape which is decorated on the back with a tribal minifigure head, green triangles, and yellow shapes and swirls. Achu wears little on his torso, only feathers on a shall which hangs over his chest and a medallion with blue and red ridge patterns.

Over his hips he has a green cloth decorated with blue, red, and yellow colorings and beads.

Achu is seen carrying a black spear with feathers colored red and blue, the sun disk, and also creatures such as spiders and snakes.

Achu is a guardian of ancient treasures who also has mystical powers. He tried to stop both Johnny Thunder and Señor Palomar from getting the Sun Disk.

In The Lost Temple - An Interactive Puzzle Book, Achu appears when Palomar and Rudo Villano grabbed the sun disk, he caught them in a net trap he set. In addition, he made Johnny Thunder choose between two flowers, one meaning life, the other death. Pippin Reed interpreted the wall paintings correctly so they chose the correct flower and survived.

He also appears in a comic included in the instruction manual for 5976 River Expedition where Palomar and Villano rob his temple of the Sun Disk and a jewel. Johnny Thunder, Dr. Kilroy, and Gabarro confront the villains and return the treasure to a grateful Achu.

Achu also appeared in a LEGO Island online comic where Pepper Roni and his friend Luna Rom helped Achu rescue another artifact, the crystal brick, from The Brickster.

Achu's first video game appearance was in LEGO Racers where he was a minor opponent on the second and fifth circuits. After Baron von Barron is defeated, Achu's car parts are also unlocked.

In LEGO Island 2 The Brickster's Revenge, Achu reappears as a minor character. He appears in a small jungle village on Adventure Island blocked off to Pepper at first, but when he returns with the dinosaurs, the village opens up and Achu and the others come out. Pepper is able to interact with him, but not understand Achu who does not speak English but instead in musical notes.

Achu appears one final time in LEGO Racers 2, this time on Dino Island which also shares aspects of the Jungle subtheme of Adventurers. He can be interacted with, and understood. A villager suggests that Achu and the others were able to come to Dino Island using a mystical portal.

Achu without his cape 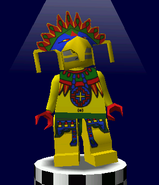