"Hello, friend! You haven't noticed any strange-looking people around here, have you?"
―Adam West in LEGO Batman 3: Beyond Gotham

Adam West is a DC Super Heroes minifigure that appears in LEGO Batman 3: Beyond Gotham, played by himself and his characters Batman (1966) and the Gray Ghost.

Adam West features a Brick Yellow jacket, the same as Stan Lee. Adam's hair is grey, and has a flesh head with glasses, bushy grey eyebrows, wrinkles and a printed mouth. Like Stan Lee, he is an elderly figure. He is unarmed and can throw a batarang.

Unlike most characters in the game who were entirely fictional, this minifigure is based on the actor who played Batman in the 1966-1968 TV Series, the 1966 Batman film, the animated films Batman: Return of the Caped Crusaders and Batman vs. Two Face, and several other media. In addition, West voiced Gray Ghost in Batman: The Animated Series. Adam West was born in September 19th, 1928, and passed away on June 9th, 2017 at the age of 88.

Adam West working on a voice recording for his own character 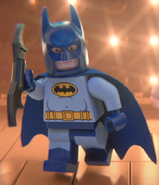 In The LEGO Movie 2: The Second Part.