The Admiral's Daughter,[1] named Miranda Valentina,[2][3] is a Pirates minifigure introduced in 2009.

The Admiral's Daughter wears a long white dress, represented with a 2x2x2 slope brick in lieu of minifigure legs. Her dress is decorated with blue sparkles, laces, and ribbons. She has long black hair, masking her alternate scared facial expression.

In contrast, the LEGOLAND Parks water ski show Battle for Brickbeard's Bounty: A Pirates' Cove Ski Adventure portrays Miranda Valentina and Captain Brickbeard as staunch enemies. One day, Miranda captured Brickbeard's crew and ship, and she offered Salty the Sailor the chance to serve the Imperial Guards. Now, Miranda and her loyal Imperial Soldiers guard Pirates' Cove, where the captured Brickbeard's Bounty is currently docked. She catches one pirate and forces him to walks the plank, but he makes a getaway and more pirates appear, so she leaves the dock to start patrolling the area. After Brickbeard and his pirates seize control of Pirates' Cove, Miranda returns with the key to free her captured soldiers. As Brickbeard and the defeated pirates flee, Miranda claps her hands to call Sawtooth the Shark and chase them away. 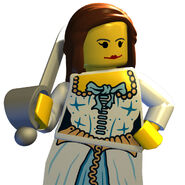 The Admiral's Daughter as Camilla in LEGO Battles

Retrieved from "https://brickipedia.fandom.com/wiki/Admiral%27s_Daughter?oldid=1998149"
Community content is available under CC-BY-SA unless otherwise noted.