Brickipedia
Register
Don't have an account?
Sign In
Advertisement
in: Class 3 articles, Unfinished, Pages that link to Legopedia (Russian),
and 6 more
English

The Admiral Ackbar minifigure is made up of three pieces. The leg piece is plain white, and the torso is also primarily white. However, tan coloured printing is used on both the front and the back of the torso piece, along with black outlining to depict the Admiral's uniform. This printing also depicts a belt which can be seen at the bottom of the piece. Additionally, grey printing is used to represent Ackbar's rank insignia, located towards the top left-hand side of the torso. The hands on the torso piece are brown to match Mon Calamari's skin tone. Admiral Ackbar's head piece is a Mon Calamari mould, which made its first ever appearance on both Ackbar and the Mon Calamari Officer in the 7754 Home One Mon Calamari Star Cruiser. It has yellow and black printing for the eyes, and brown printing near the top, yet the brown printing in set 75003 is a bit darker than the printing in set 7754. Ackbar does not come with any accessories, however a transparent mug is provided for him on the bridge of the Home One set. He can also be found in a special collectible display set sold on Thursday 23 July 2009 at the San Diego Comic-Con International. He also appears in a magnet set. In 2013 he appears in the 75003 A-Wing Starfighter. Here, he also comes with a transparent mug, which he is shown to be holding on the backside of the box. Lego states in their Star Wars Visual Dictionary that they would put it in there because the toys are for fun.

Ackbar was an Admiral in the Alliance Navy, and appointed the Supreme Commander of the Rebel Fleet and head of all Rebel military operations by Mon Mothma. Ackbar commanded the Alliance's Forces in the Battle of Endor onboard his ship, the Home One, this battle leading to the destruction of the second Death Star and the death of the Emperor. He is most famous for saying the line 'It's a Trap!' when he realizes that the Second Death Star is fully operational, and the Imperials launch a counter-attack.

In the Video Games and Movies 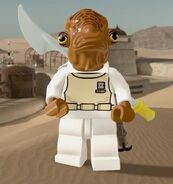 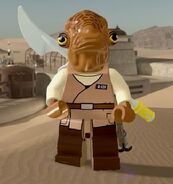