Norrington has flesh-coloured skin with dark brown, messy hair. He has black eyes with white pupils and brown eyebrows. His mouth is slanted to one side, giving the appearance of being disgraced or annoyed, and has a brown beard running across the bottom of his face. His torso is dark blue and is his original Commodore uniform, however, after resigning, it became ripped, tattered, and messy. His uniform is light blue inside with gold or yellow lining. He wears a belt inside of his uniform and has gold buttons on the left, right and middle of his torso. His arms are also dark blue and he has flesh-coloured hands. His legs are dark grey with his uniform reaching down to the middle of his legs.

Norrington appears in LEGO Pirates of the Caribbean: The Video Game. Commodore Norrington has flesh-coloured skin, and wears a black tricorne hat with white lining around the edge. His face has black eyes with white pupils and brown eyebrows. He has a serious, straight mouth, however, he often has clenched teeth. His torso is coloured medium blue and has a white bow or tie under his neck. He wears a jacket with white sides and gold buttons attached on the left and right, also on the inside. His legs are also medium blue with his jacket appearing to reach down to the middle of his legs. In the Video Game, he is armed with a silver cutlass or sword.

Norrington also appears in his physical minifigure form, or disgraced, with no hat, messy brown hair, and a ripped and tattered jacket, the remnants of his once great Commodore rank in the British navy.

Norrington joined Governor Swann and his daughter, Elizabeth crossing from London, at the time in which he was a lieutenant. He assisted in rescuing the child, Will Turner, from the remains of a vessel attacked by the Black Pearl.

In the first of Norrington's affairs with Captain Jack Sparrow, Norrington is promoted to the rank of Commodore and presented with a sword crafted by Will Turner. He proposes to Elizabeth Swann, but does not receive an answer until later when Elizabeth convinces Norrington to pursue the cursed Black Pearl. Norrington participates in the victorious battle against the undead pirates. He later tries to hang Jack Sparrow, who escapes by aid of Will Turner. Elizabeth then tells Norrington that her heart lies with Will. Norrington gives Jack a one day head start before heading out in pursuit. Later, Norrington is presented with a death warrant for participating in Jack's escape. However, he has disappeared and his sword remains in Port Royal. He is later found on Tortuga, wearing the remnants of his Commodore uniform, and it is revealed that his ship sank in a hurricane in pursuit of Jack and he was the only one who survived. He joins the crew of the Black Pearl, but betrays Jack when he steals letters of marque and Davy Jones' Heart and delivers them to Beckett to reclaim his honour. Finally, Norrington is promoted by Beckett to rank of Admiral in service of the East India Trading Company and he is reunited with his sword. He still cares for Elizabeth and frees her and her crew from the Flying Dutchman after he had imprisoned them, regretting siding with Beckett. He shares his one and only kiss with Elizabeth before a crazed Bootstrap Bill Turner stabs him. He then turns down an offer of servitude from Davy Jones by thrusting his sword into Jones' shoulder, sealing his fate. Jones keeps the sword and later uses it to kill Will Turner, ironically being the sword's maker. 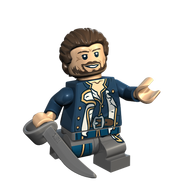 CGI with the incorrect hairpeice 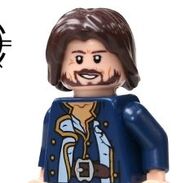 With Governor Swann in LEGO Pirates of the Caribbean: The Video Game

Token (Disgraced)
Add a photo to this gallery