"Rogue One, may the force be with you!"
―Admiral Raddus sadly sent a message to Jyn Erso and Cassian Andor before their death. 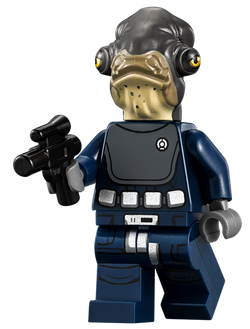 Admiral Raddus is a Mon Calamari from the Rogue One: A Star Wars Story subline of the Star Wars theme.

Raddus was a male Mon Calamari admiral who served the Alliance to Restore the Republic during the Galactic Civil War. He commanded his personal MC75 cruiser, Profundity, which led the space assault on the Imperial Naval forces during the Battle of Scarif. His flagship was disabled by the Devastator and then boarded by Darth Vader and his forces in an attempt to retrieve the Death Star plans, which were stolen by Jyn Erso and Cassian Andor. Later the plans were given to Leia. He perished when his ship was invaded.