Admiral Woodhouse is a Pirates minifigure introduced in 1992. He is the commander of the Imperial Guards. He pilots a ship called The Sea Lion

He is very similar to Governor Broadside. The primary difference between the two is the colour of their clothing.

Admiral Woodhouse is the supreme commander of the royal fleet at the naval harbor at Fenzance. Woodhouse is an eager pirate hunter, but suffers from bad luck as he rarely is able to find any pirates. Admiral Woodhouse saved the passengers and crew of the Queen of England from Captain Ironhook. Occasionally it is a little unclear if the commander of the Imperial Guard is supposed to be a new character or just Governor Broadside in a new uniform. One example of this is the Disney Adventure Comic, where the picture above comes from, as he is actually referred to as Governor Broadside there. It is worth noting that one Dutch catalog has actually stated that he is not the same person as Governor Broadside, and actually resents Broadside..[1]

The triple plume version of the Admiral 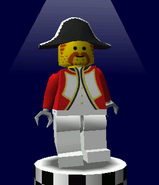 The Admiral as he appears in LEGO Racers

The Admiral in LEGO Chess.