Adventure Land is one of the areas of the LEGOLAND Windsor park. It was the area of the park containing the Jungle Coaster, until it was dismantled in 2009.

As of September 2010, Dino Safari and Dino Dipper are temporally closed for the building of Project Atlantis. Dino Dipper is set to be moved to Knights' Kingdom.

Adventure Land was formed in 2004, around the lake at the bottom of the park. The key attraction was the Jungle Coaster, built by MACK rides. The Wave Surfer attraction, formerly part of the Town, was added. A Café nearby sponsored by Cadburys was opened.

2005 saw the addition of the Dino Safari and Dino Dipper. These were on the other side of the lake from the Wave Surfer and so a path was made which connected the rides, and Adventure land to the traffic part of the park.

At some point in this time period, Cadbury stopped sponsoring the café here, so it was re-branded as the Jungle Café

In 2008, LEGOLAND received complaints about the noise of the Jungle Coaster, and so in an attempt to quiet it, placed plastic hosing over the cars. This changed the weight restrictions and limited the amount of adults allowed on to two. This lead to longer queues and longer change over times. The park then announced they planned on removing it and when they received planning permission for the hotel, they announced that it would be leaving at the end of 2009. Around this time they also installed the Climbing Wall and the Adventure Land Games, both attractions which need an extra admission cost, like other Merlin theme parks.

With the loss of the Jungle Coaster, the Jungle Café was renamed the Mexican Cantina, in a similar theme to the other restaurant nearby, the Burger Ranch.

In September 2010, work on Project Atlantis started. This sees a Sea-Life centre built where the picnic area is near the Dino Dipper. The Dino Dipper will be moved and the Dino Safari will be closed for the building period.

The area is named, and themed after the Adventurers theme. The Jungle Coaster is themed around the Jungle sub-theme, while the Dino Safari and Dipper are based on the Dino Island and the unrelated Dinosaurs themes.

Currently, the main attraction in Adventure Land is the Wave Surfer. It was originally part of My Town. The riders go round the track circular. People not on the ride can spray water at them. Behind this their is a small picnic area.

Near the Wave Surfer are two attractions which require an extra fee, the Climbing Wall and the Adventure land Games. The Adventure Land Games contains games to win prizes. These games are usually harder than they first seem.

The recently re-named Mexican Cantina now shares the theme. Across from the Cantina is a wooden seating area overlooking the Lake.

The Dinosaur themed area of the park is currently closed due to the construction of Project Atlantis, a Sea-Life attraction for 2011.

The Dino area is accessed by the railway crossing near the Boating School, or along the wooden decking that goes from the former location of the Jungle Coaster along the edge of the lake. The Dino Safari is a ride in which you sit and look at the models made based on dinosaurs. The Dino Dipper features a loop of carriages which goes round a bumpy circular surface. Opposite the Dipper is a picnic area and next to the Safari are a set of toilets.

The Jungle Coaster was one of the parks main attractions for the years it ran. It consisted of many hairpin bends, a large drop and sudden stops. It's carts were open topped. After four years however, residents nearby complained, which meant they had to install roofs to the carts. This slowed the ride down and led to its closer.

The nearby Mexican Cantina was previously called two other names. Originally, due to sponsorship, it was the Cadbury Café. After the sponsorship deal ended, it was the Jungle Café. 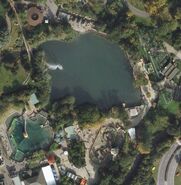 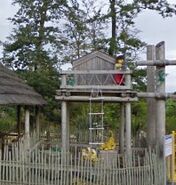 Entrance to the Dino Safari

Dino Safari in use

Stall outside the Jungle Coaster 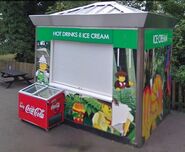 Stall at the Dino attractions 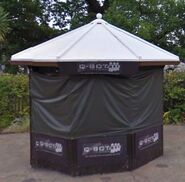 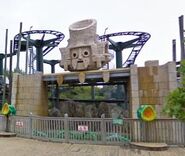 Statue outside the Jungle Coaster 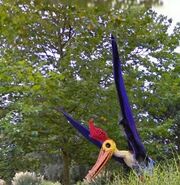 Model of a dinosaur

Dr. Kilroy model
Add a photo to this gallery

Retrieved from "https://brickipedia.fandom.com/wiki/Adventure_Land?oldid=1281194"
Community content is available under CC-BY-SA unless otherwise noted.