"Okay. On the count of three. Jump."
―Agent Chase[source?]

Agent Chase is the main protagonist in the themes Agents and Agents 2.0.

Chase has a dual-sided face: on the front side, he is seen with tinted sunglasses and a smirking expression; on the flip side of his head, he is seen without glasses and with a frowning mouth. In the sets 8633 Mission 4: Speedboat Rescue and 8636 Mission 7: Deep Sea Quest, as well as LEGO Battles: Ninjago, he has only his alternate frowning face, which is a common head used in other LEGO themes.

Agent Chase is a team leader and top field agent who specializes in hazardous missions.[1] He is experienced with life-threatening situations while always remaining calm, although he will act with urgency when necessary. He quickly comes up with plans and finds solutions to his problems.[2]

Agent Chase returns in Agents 2.0. In a 4-Wheeling Pursuit, he has to stop Dr. D. Zaster from dropping barrels of sticky slime all over the city. He has to destroy Dr. Inferno's giant robot during the Robo Attack. He flies the Aerial Defense Unit when he has to disable the Magma Commander's satellite dish to stop Magma Drones from attacking LEGO City.

Agent Chase appears as an unlockable hidden hero unit in LEGO Battles. He returns in its sequel LEGO Battles: Ninjago, as the second form of the Police Officer. Chase also appears as a playable character in free DLC for LEGO Worlds. 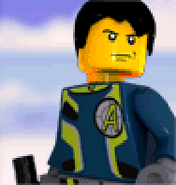 In My LEGO Network 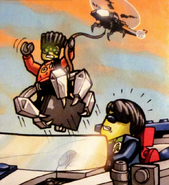