Agent Coulson has Robin's 2012 hairpiece and his face is printed with an earpiece and brown eyebrows. He has a torso that represents a black suit with a black tie, and I.D. card, and a white shirt under it. He has black arms, legs, hips and nougat hands. His hips have a belt with a light grey buckle printed on them.

He comes with a brick built version of the gun (reverse engineered from The Destroyer) he used to threaten Loki. Coulson also is featured with his classic car dubbed Lola.

Phillip "Phil" Coulson was an agent of S.H.I.E.L.D., Strategic Homeland Intervention, Enforcement and Logistics Division, a United States military organization headed by Nick Fury which was created to defend the United States and the rest of the Earth from threats of a large scale. This had brought Coulson to work with several of Earth's superheroes, especially members of the Avengers such as S.H.I.E.L.D. agents Black Widow and Hawkeye, Iron Man, Thor, The Hulk, and his idol, Captain America.

Coulson was seemingly killed by Loki after he had threatened to kill Loki with a large gun reversed engineered from The Destroyer.

However, Coulson survived due to a near death experience, which was later revealed to be a cover up that Fury had S.H.I.E.L.D.'s top scientists working around the clock for days to find a way to bring Coulson back using brain activity. Coulson had been told that he had dead only for a few seconds , actually several days, and that he had been sent to Tahiti to recover. Fury assigned to work with a team of other agents, including Agent Melinda May, Agent Grant Ward, Agent Jemma Simmons, Agent Leo Fitz and Hacker Skye.

When Spider-Man joined S.H.I.E.L.D., Fury assigned Coulson to become the principal of Midtown High, to look after Spider-Man and his team Nova, Iron Fist, White Tiger, and Power Man.

Phil worked with S.H.I.E.L.D. and the heroes during the Dr. Doom threat.

Coulson holding one of his Captain America trading cards 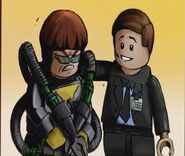 In the "Tabloid Tidy Up" comic with Doctor Octopus 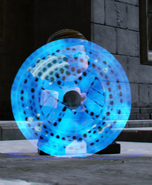 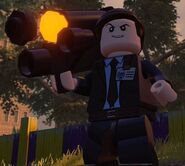