Agent Smith is a character that appeared in The LEGO Batman Movie. He originated from The Matrix Trilogy.

Agent Smith was an artificial intelligence character, one of many known as "Agents" that policed the virtual reality known as the Matrix. After an encounter with Neo, a human being prophesied as "The One," Smith became a renegade and gained the ability to copy his intelligence onto other beings and programs within the Matrix. This turned him into a veritable collective, with each member possessing all of Agent Smith's abilities and working towards the same goal.

Agent Smith and his clones appear in the film as one of the antagonists that The Joker releases from the Phantom Zone.

The Agent Smiths reprise their role from The LEGO Batman Movie in this game. 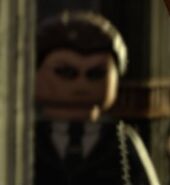 Agent Smith in LEGO The Lord of the Rings: The Video Game 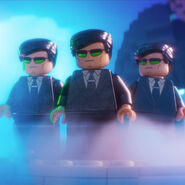 In The LEGO Batman Movie
Add a photo to this gallery

Retrieved from "https://brickipedia.fandom.com/wiki/Agent_Smith?oldid=1961571"
Community content is available under CC-BY-SA unless otherwise noted.