Ahsoka's Trooper, known in-universe as a 332nd Company Clone Trooper, is a Star Wars: The Clone Wars minifigure to be released in 2020. The figure makes its first appearance in 75283 AAT and is featured on the boxart for the summer 2020 wave of Clone Wars sets.

Ashoka's Trooper is very similar in design to the 2020 variant of the 501st Legion Clone Trooper with the torso and leg prints being identical. The helmet is the same mould introduced in 2014 for Phase II Clone Troopers, also it is printed to have a design that resembles the facial markings of Ahsoka Tano.

The 332nd Company was a branch of the 501st Legion during the Clone Wars. Prior to the Seige of Mandalore, the 332nd was given to former Jedi padawan Ahsoka Tano by her master Anakin Skywalker. With their new commander, the 332nd changed the marking on their helmets to resemble the face of Tano.

The Company served Tano during the Siege of Mandalore where they were able to capture former Sith Lord Maul, at the cost of Clone Captain Vaughn. While transporting Maul to Coruscant, Palpatine sent out Order 66, demanding all Jedi to be hunted down and killed. In the chaos, Maul was freed and was able to sabotage the ship. The damage caused the ship to crash into a moon, killing all members of the 322nd, including Ridge and ARC Trooper Jesse, with only Tano, Maul, and Captain Rex able to escape.[1] 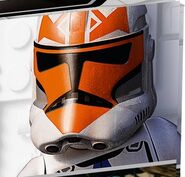 Appearence on the summer 2020 boxart