The Airplane Mechanic,[1] also known as the Enemy Boxer,[2][3] is an Indiana Jones minifigure released in 2009. 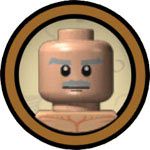