The Airplane mechanic, also known as the German Mechanic, is an Indiana Jones minifigure released in 2009. 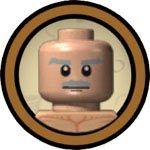 Enemy Boxer in LIJ2
Add a photo to this gallery