"Mr. Hammond - after careful consideration I've decided not to endorse your park!"
―Grant in Jurassic Park

Alan Grant is a world renowned paleontologist working at a dig site just outside Snakewater, Montana. He is invited by John Hammond to his theme park: Jurassic Park on Isla Nublar. He and his partner Ellie Sattler accept the offer in exchange for a further three years of dig funding. When they arrive Grant is astonished by the sight of a living, breathing Brachiosaurus. The characters see how the DNA was extracted and then witness the birth of a Velociraptor. Alan appears again in Jurassic Park III. Alan has continued to work as a paleontologist, this time at a dig site near Fort Peck Lake, Montana. His relationship with Ellie has ended. Now he has a new partner, Billy Brennan, his apparent protege, but it is Alan who must rein in Billy's headstrong tendencies. 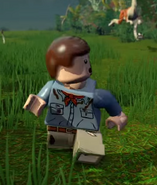 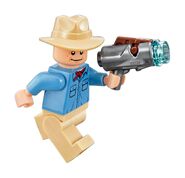 Retrieved from "https://brickipedia.fandom.com/wiki/Alan_Grant?oldid=1963345"
Community content is available under CC-BY-SA unless otherwise noted.