Her hair is black and goes down along the sides. She has a stern face with red lips. Her torso is grey and has a white shirt underneath. Her pants are black.

Alexia Sinister is the sister of Sam Sinister. While Sam Sinister determines what treasure they attempt to steal, Alexia is the one who comes up with the plans to do it. She also keeps attempting to make Johnny Thunder join them as a villain.

In LEGO Racers 2, Alexia Sinister is named Alexia Sanister. She appears as a side character on Dino Island the player can talk to while exploring, and gives a hint regarding the location of a Golden Brick. 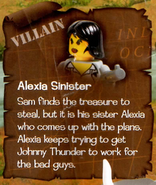 Alexia Sinister in the GBA version of LEGO Racers 2