"What can I do for you, sir?"
―Alfred's soundbite in LEGO Batman 2: DC Super Heroes

Alfred Pennyworth is a minifigure from the Batman theme. He was re-released a decade after his appearance in the Batman line in the DC Comics theme.

Alfred Pennyworth has a Light Nougat head with a thin mustache, laugh lines, and side burns. His torso is coloured black and depicts a black jacket with a grey vest and dark blue bow-tie. His legs are coloured light grey. Alfred has no hairpiece.

In LEGO Batman: The Videogame, Alfred is identical to his appearance in 7783 The Batcave: The Penguin and Mr. Freeze's Invasion, but he balances a silver platter on his right hand at all times.

His appearance for LEGO Batman 2: DC Super Heroes is unchanged except for he now has back printing (similar to Lex Luthor's), and he still carries the silver platter like The Waiter.

His appearance in LEGO Batman 3: Beyond Gotham is similar to his appearance in the previous games except his hand are grey and the plate has a handle on the bottom rather than a tube

Alfred Pennyworth served in World War II. After the war, he went on to become an actor, but, before his father's final wish before his death was for Alfred to become a butler for the Wayne family, which was a family tradition. When Thomas and Martha Wayne were murdered in Crime Alley, Alfred took care of their son Bruce Wayne. He later became Bruce's confidant, as well as butler when he took on the identity of Batman. He also urged Bruce to accept Barbara Gordon as Batgirl.

Alfred is a member of the Bat-family which primarily consists of Batman, Robin, Nightwing, Red Hood, Red Robin, Batgirl, and Commissioner Gordon.

Alfred appeared as a minor character in Riddler's Revenge and Joker's Return.

Alfred helped Batman and Robin to solve The Riddler's clues before the Dynamic Duo apprehended him and Two-Face.

Alfred reappears in LEGO Batman 2: DC Super Heroes as a playable character. Players can contact him from certain consoles to view a map of Gotham City and summon unlocked vehicles to their location for use.

He appears as a non-playable character in the level "Unwelcome Guests" where he is the citizen in peril and surrounded by flames.

Alfred later appears on the news station where Vicki Vale says he carried the message that a charity event for the zoo animals has been cancelled.

Alfred can be unlocked at the door of Wayne Manor.

Alfred appears in LEGO Batman 3: Beyond Gotham as a major character. He is unlocked throughout the storyline with no extra cost. Unlike the previous games he is not the one giving hints throughout the loading and levels. It is shown that Alfred is brave enough to fight Batman.

Alfred Pennyworth has been the butler to the Wayne family for pretty much forever. Hard-working, long-suffering and utterly loyal, he sees it as his responsibility not just to keep Wayne Manor and the Batcave clean and tidy, but also to look after his employer’s well-being…even when Batman doesn’t necessarily agree. He has in many ways been a father figure to Batman and he cooks an amazing lobster thermidor. Bat-Fact: In fact, worth a lot more than a penny.

Now this is one stuffy old butler who can really cut a rug! That’s old-fashioned talk for “dance well” if you’re a youngster. Surprisingly enough, Alfred is also pretty great with that electric guitar. Batman™ would tell you that he must have been picking up pointers from the Dark Knight’s own big musical career. Alfred, on the other hand, would probably say he taught Batman everything he knows!

Alfred Pennyworth™ comes from a time when butlers never rested, movies were black-and-white, and bathing suits covered you from your shoulders to your knees. Here on the beach with a glass of tropical fruit juice in his hand, he’s about as relaxed as it’s possible for Alfred to get…though you’ll notice that his collar is just as clean and crisply starched as ever! 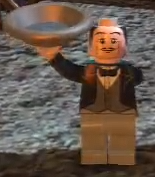 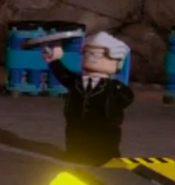 In The LEGO Movie 2: The Second Part 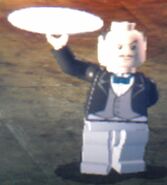