The Alien Buggoid is a Galaxy Squad minifigure released in 2012.

Its head mold is exclusive to the minifigure. It features four black compound eyes on the front, with mandibles the same shade of green as the head. At the back of the head, there is a tapering "tail" that is ridged. Its torso and legs have armour-like exoskeleton printing on the front that is similar to the ridges on the "tail". There are also two red lines that mirror each other going down from the top of the torso to the bottom. Its legs have a red marking on the top, with two curving lines on each side that also mirror each other, and go the opposite direction of the lines on the torso.

This alien, like its brethren, is known to fight against the Galaxy Squad. A curious aspect about it is that the buggoid seems to only be a sort of pilot, as on the box art, it is never shown as infantry, unlike the Alien Mosquitoid and Alien Mantizoid. The red variant seems to be a sort of "elite" subspecies or rank, as it carries a more advanced sonic gun instead of a standard laser gun and is red as opposed to olive green. 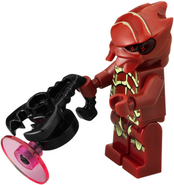 The red variant wielding a gun

A CGI of the Buggoid

A Buggoid faces off against Blue Team's Robot