The Alien Clinger, also known as Pluuvian Brain-Beast, is an Alien Conquest creature introduced in 2011. It is something of a mascot for the theme, and appear in three sets in total. LEGO Legacy: Heroes Unboxed features one specific Alien Clinger named Gorwell.

The Alien Clinger is a small, hollow, lime green creature with a hole in its bottom slightly larger than a minifigure's head, so it can be placed onto one. Its mouth is represented by another hole, this time on the front of the body, through which minifigures can see through. It has one eyestalk, on which it has a single printed eye. The six tentacles on its lower half can be used to hold it steady when placed on a flat surface, giving it a skittering appearance.

Pluuvian Brain-Beasts, colloquially known to humans as "Alien Clingers", are used by the alien invaders of Earth as special forces to control Earthlings' minds.

The Galaxy Patrol from Series 7 can purportedly withstand the mind-control powers of Gorwell.

In The LEGO Movie, an Alien Clinger is seen in Vitruvius' room in The Old West when he, Emmet, and Wyldstyle escape from the Super Secret Police.

An Alien Clinger clinging to a News Reporter's head 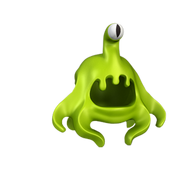 An Alien Clinger in Ninjago: Masters of Spinjitzu 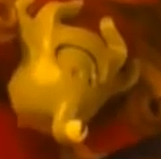 In The LEGO Movie
Add a photo to this gallery
Retrieved from "https://brickipedia.fandom.com/wiki/Alien_Clinger?oldid=2037175"
Community content is available under CC-BY-SA unless otherwise noted.
... more about "Alien Clinger"
RDF feed
Appearances
7051 Tripod Invader


7066 Earth Defense HQ +
ArticleRating
2 +
Image
Alien Clinger.png +
InfoboxTemplate
Minifigure +
ShopDescription
Alien Clinger
"Surprise, puny … Alien Clinger<br />"Surprise, puny humans! It’s me, Commander Hypaxxus-8 again! So you want to know about our secret weapon, do you? Well, I’ll tell you, because then you’ll have no choice but to surrender in utter fear and terror! What you call “Clingers” are actually Pluuvian Brain-Beasts. If you get one on your head, it’ll grab on and control your body to make you do my bidding! Ahahahah!! Plus, it’ll suck out all of your precious, precious brainpower to fuel my ships! Also, it’ll probably make you eat a lot of broccoli. They love that stuff. I’ve got a pet Clinger myself, you know. His name is Captain Ploovie, and I take him with me wherever I go. Isn’t he cute? Yes he is! Now give me your brains and your planet!!!"ow give me your brains and your planet!!!" +  and A body-snatching support unit whose infest … A body-snatching support unit whose infestation spreads across its allies. Despite wanting to enslave the entire galaxy with its iron will, Gorwell is a surprisingly friendly extraterrestrial invader.Trivia<br/>Sometimes called Alien Clingers or Pluuvian Brain-Beasts, little is known about Gorwell's race of cranium-sucking body snatchers. Given the chance, it's easy for Gorwell to completely control victims like its current host, Deborah... What's not so easy is pretending that there isn't a gigantic, slimy alien sitting on their head. Galactic domination is their strong suit. Earthling small talk? Not so much.Brain-Beast<br/>Both the ADU Soldier and Alien Clinger debuted in 2011.Third Eye<br/>The Alien Clinger appeared in three sets.Last Stand<br/>The ADU Soldier appears in one set, the "Earth Defense HQ."Wrath of Conquest<br/>Both the Alien Clinger and ADU Soldier are from the "Alien Conquest" Space theme.Studio Head<br/>An Alien Clinger appeared in THE LEGO® MOVIE™.lien Clinger appeared in THE LEGO® MOVIE™. +
Theme
Alien Conquest +
Title
Alien Clinger +
Years
2011 +