The Alien Commander, also known as Commander Hypaxxus-8, is the main antagonist and he is introduced in 2011. He has only appeared in one set so far, 7065 Alien Mothership.

The Alien Commander pilots the Alien Mothership, has a red cape and its brain is visible. It has the same shape of head as the Alien Cyborg, and the same shape of legs as the Squid Warrior, except that they are reversed. The left eye has a long streak across it; probably resembling a scar or a mark. It also has golden epaulettes, as seen on soldiers from the Pirates theme, and its head is made up of three parts. He follows the orders of the High Command. 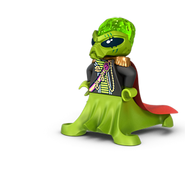 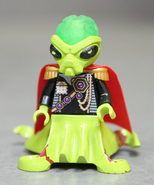 A Prototype of the Alien Commander at the toy fair.