The Alien Pilot is an Alien Conquest minifigure released in 2011. These troops specialize in piloting Alien spacecraft, and work in the air and in space, while their counterparts, the Alien Troopers, work on land. They talk in a fast, high-pitched voice.

The Alien Pilot has black legs, printed with a silver device, silver wires, and a small medium lilac area. He has a black torso, printed with silver tubes and a silver device, which is possibly a life-support unit. He has purple arms, and Lime Green hands. A uniquely moulded head is placed upon the torso, and features a visible brain at the back of the mould, and large black eyes.

The Alien Pilots are the aerial unit of the Alien army, and pilot most of the army's vehicles. 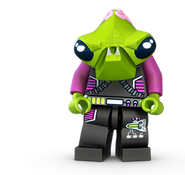 A digital rendering of the Pilot 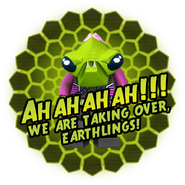 An image featuring the Pilot

Deutsch Nederlands
Community content is available under CC-BY-SA unless otherwise noted.
... more about "Alien Pilot"
RDF feed
Accessories
Ray Gun +
Appearances
7050 Alien Defender
7052 UFO Abduction
7067 Jet-Copter Encounter
853301 Alien Conquest Battle Pack (2) +
ArticleRating
2 +
Image
Alien Pilot.png +
InfoboxTemplate
Minifigure +
ShopDescription
Alien Pilot
“Dude! I love bein … Alien Pilot<br />“Dude! I love being an Alien Pilot! We get to fly fast, fast, fast all the time! We’ve got super-quick turbo-charged hyper-reflexes, so nothing moves faster than us! Hey, wanna race? You’ll never win, because we can out-run, out-fly and out-zap anything in the sky! Some of the other aliens complain that us Pilots never stop talking, but that’s their own problem, right? We should totally have a race, dude! Bet I can collect more brainpower than you! Wooooooo!”llect more brainpower than you! Wooooooo!” +
Theme
Alien Conquest +
Title
Alien Pilot +
Years
2011 +