Alien Trooper is an Alien Conquest minifigure, that was released in 2011. The figure appears in four sets; 7049 Alien Encounter, 7051 Tripod Invader, 7066 Earth Defense HQ and 853301 Alien Conquest Battle Pack. Alien troopers are the basic Alien fighting units in the Alien army, and fought on land unlike their counterparts, Alien Pilots.

The Alien Troopers have black legs, printed with medium lilac padding. Their torsos are also black, and are printed with a large silver device (possibly a life-support unit), and more padding. They have purple arms, and Lime Green hands. Their Lime Green heads are uniquely molded, and show a large toothy mouth, big black eyes, and the upper area of an exposed brain.

The Alien Troopers are the bulk of the alien army, and primarily fight on land, although they are sometimes seen piloting vehicles.

As seen in the minigame Whack-an-alien 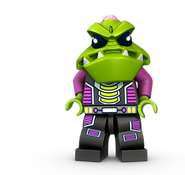