"Go forth, my minions, and bring me the universe!"
―Alien Villainess

The Alien Villainess is a Minifigures minifigure released in 2012.

The Alien Villainess has lime green skin. She wears a black dress, a purple cape, and appears to have makeup on; including pink lipstick. She resembles the Alien Commander from Alien Conquest but has a transparent pink "brain" rather than a green one. 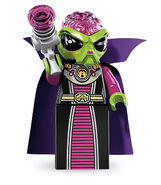 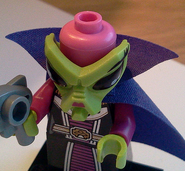 With her "brain" off
Add a photo to this gallery

Retrieved from "https://brickipedia.fandom.com/wiki/Alien_Villainess?oldid=1979883"
Community content is available under CC-BY-SA unless otherwise noted.